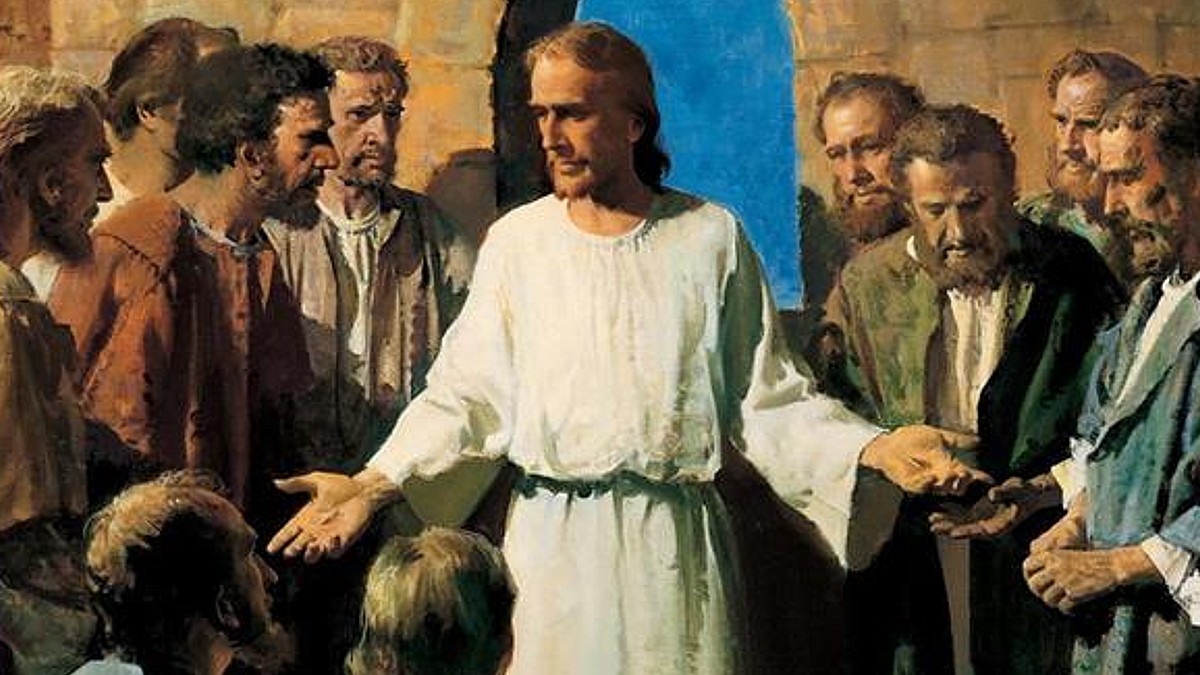 It’s interesting to go back and reread things with a new perspective and see what I might have missed the first time or ten–especially with Joseph Smith’s revelations. It’s now pretty easy to recognize when Joseph draws on on the Hebrew Bible or the New Testament in constructing his revelations. D&C 45 is another revelation with a decidedly apocalyptic flavor. It’s full of the hellfire and brimstone we find in his revelations between 1830-1836. And it’s full of references to the Bible. It even includes a restating of Matthew 24, or “The Little Apocalypse.” (Joseph seems to be fairly consumed the Second Coming.) In the first 16 verses of  D&C 45 we find references to or direct citations from,

You get the idea. This is pretty standard for Joseph’s canonized revelations.  What caught my eye the most recent trip through 45 are verses 51-53, ostensibly spoken by Jesus Christ,

“And then shall the Jews look upon me and say: What are these wounds in thine hands and in thy feet? Then shall they know that I am the Lord; for I will say unto them: These wounds are the wounds with which I was wounded in the house of my friends. I am he who was lifted up. I am Jesus that was crucified. I am the Son of God. And then shall they weep because of their iniquities; then shall they lament because they persecuted their king.”

This comes from Zechariah 13, with the “feet” added for extra affect. I decided take another look Zechariah 13 and I was not one bit surprised to discover that when read in context it has nothing to do Jesus Christ.  At all. Pay attention to who is speaking and the the subject,

So, a few questions:  Did Jesus “speak lies in the name of the Lord?” No. Was Jesus ever ashamed of his visions? I doubt it.  Did he ever say, “I am no prophet, I am a husbandman?” I find that extremely unlikely. There’s no Jesus in Zechariah 13. This should be sufficient to eliminate Jesus from this chapter and any messianic interpretation.

But what about the context? What and when is “that day?” From what I understand Zechariah can split in two–chapters 1-8 (First Zechariah) and 9-14 (Second Zechariah), an early example of apocalyptic literature. Chapters 12-14 constitute a single oracle.  (Curse these arbitrary chapter breaks.) In 12 we read,

“In that day” is a perplexing term.  I don’t know that I fully understand it.  Christian commentators seem to believe it refers to the “Second Coming” and “Millennium.” I have a hard time with that interpretation, however, especially if this is an example of apocalyptic literature, which as a general rule should always be read symbolically.  I don’t think the Hebrew prophets were talking about a singular event 2,500 years into the future or the “Second Coming.” They might have, but I’m more inclined to believe (and I could be wrong) that they are speaking of preservation, deliverance and restoration in very broad terms using poetic, hyperbolic and symbolic language (Isaiah 54 and 3 Nephi 16: 4-5,12, for example).

Clearly this is hyperbole. I don’t think anyone expects a repeat of Raiders of the Lost Ark.

Whatever the case, part of the purification process is eliminating the false prophets (or prophets who are no longer needed) and the unclean spirits from the midst of Judah and Jerusalem.  Which takes us to the false prophet(s) of chapter 13.

The primary reason 13 has been interpreted as Jesus is the KJV translation,

“And one shall say unto him, What are these wounds in thine hands?”

The Christian translators have revealed their biases here. I don’t fault them for this interpretation, but it’s incorrect.  The Hebrew word translated as “in” is bên.  In Genesis 9:16, 10:12, 13:3, 15:17, 20:1, 31:37, 32:16 and many others bên is translated as “between” in the KJV.  The translators, who tended to see Christ throughout the Hebrew Bible, decided to translate bên in Zechariah 13 as “in,” rather than “between.”  There’s a big difference between in and between.  The former could be interpreted as Jesus’ hands.  The latter is the back or chest.  Modern translations render 13:6 as,

I decided to check some commentaries in large part they agree Zechariah 13 is not a reference to Jesus,

“The reference which Dr Pusey and others have seen in this verse to our Lord and to the prints of the nails in His hands is in a high degree forced and arbitrary. It cannot possibly be reconciled with the preceding context, with which the verse intimately coheres.” (Cambridge Bible)

“I do not think that these words are spoken at all concerning Jesus Christ. I have heard them quoted in this way; but I cannot hear such an application of them without horror. In quoting from the Old Testament in reference to the New, we cannot be too cautious. We may wound the truth instead of honoring it.” (Adam Clarke)

“To see in this passage a reference to our blessed Lord and his crucifixion, though such an opinion has the support of the Roman Liturgy and of many interpreters, is to do violence to the context, and to read into the words a meaning wholly alienfrom the subject of false prophets, which is the matter in hand.” (Pulpit Commentary)

“Though some expositors believed this verse describes Messiah and His wounds, the preceding context and lack of any New Testament citation of the verse in relation to Messiah argue against this view.” (Dr. Thomas Constable)

Certainly there are commentators who argue it does reference Jesus, but the context doesn’t allow that interpretation unless Jesus is a false prophet.  I think we’d all agree He isn’t.  Despite this, the LDS chapter heading for Zechariah 13 reads,

“The Jews will gain forgiveness at the Second Coming—They will ask the Lord, What are these wounds in Thine hands?—The remnant, tried and refined, will be His people.”

Here, again, is the peril of reading the scriptures in isolation, though McConkie was relying on Joseph Smith rather than the text itself, and biased exegesis.  One of the wisest things I’ve heard is that when reading the scriptures, we have to read what comes before it and after it.  Context is everything.  If we ignore the context we misinterpreting the passage. The LDS Bible prejudices the reader by giving an incorrect summary of the chapter.

So, the question is if Zechariah 13 is not about Jesus, why does Jesus quote it and apply to Himself in D&C 45?  To me the answer is obvious: it’s not a revelation, but the product of Joseph Smith’s own mind.  People in Joseph Smith’s day probably interpreted this chapter as a reference to Jesus, and so did Joseph Smith.   I’m sure Joseph sincerely believed Jesus would appear before the Jews and he probably believed he was acting as God’s agent when he wrote D&C 45.  But we have to remember: he was only 25 years old in 1831 and entrenched in an apocalyptic worldview.  He was still very, very young. Not that youth precludes him from revelation, but he was still inexperienced and not nearly as knowledgeable in the scriptures as we have traditionally believed.  This is fine.  Don’t let it worry or upset you.

But I believe there’s a much larger issue at play here.  It seems we treat the scriptures as clay–something malleable we can shape and form into whatever we want–plate, a bowl, a vase, a coffee mug, an abstract sculpture–to make them fit our beliefs.  This is not unique to Mormonism, of course, but we seem to be especially guilty of it.  If we can take things like “ensign to the nations,” the “stick of Ephraim,” and the “Mountain of the LORD’s house” and make them about Mormonism or the LDS church when they very clearly aren’t about Mormonism or the LDS church; or make Joseph Smith “the marred servant” when it very clearly refers to Israel; and make ourselves “lineal Israel” when we are, in fact, Gentiles, what’s the point of the scriptures?  It’s not our right our privilege to twist the words of the prophets to fit our preconceived notions and biases and doctrines.  It’s a very serious thing to do violence to the text.  As Clarke aptly put it: we wound the Truth instead of honoring it.

“Behold, the scriptures are before you; if ye will wrest them it shall be to your own destruction.”